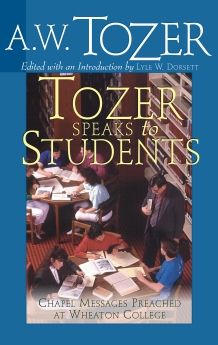 Except for C. S. Lewis and Oswald Chambers, it is difficult to find a 20th-century Protestant author who has a wider audience than Tozer. With more than 3 million books in print, the works of Tozer find their place on library shelves literally around the world.

However, it is less well-known that Tozer had a particularly profound impact on college students. This volume consists of never-before-published chapel messages and sermons preached during 1952 and 1954 at Wheaton College.

“In many ways, Tozer’s messages are just as timely today as they were a generation ago,” notes compiler and editor Dr. Lyle Dorsett. “The truths are timeless. It is my prayer that he will speak to you with the same life-changing power that he spoke to his generation.”